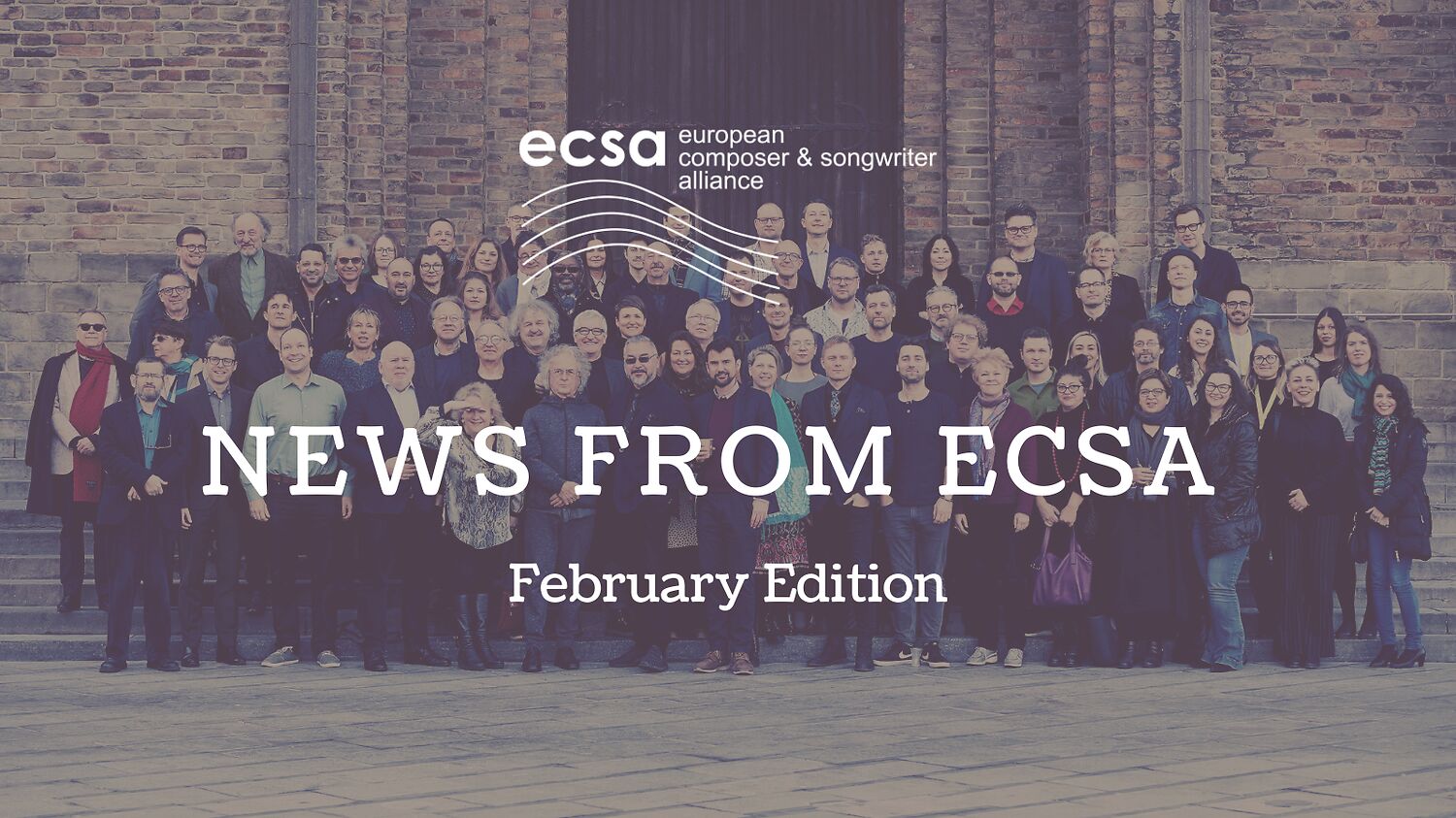 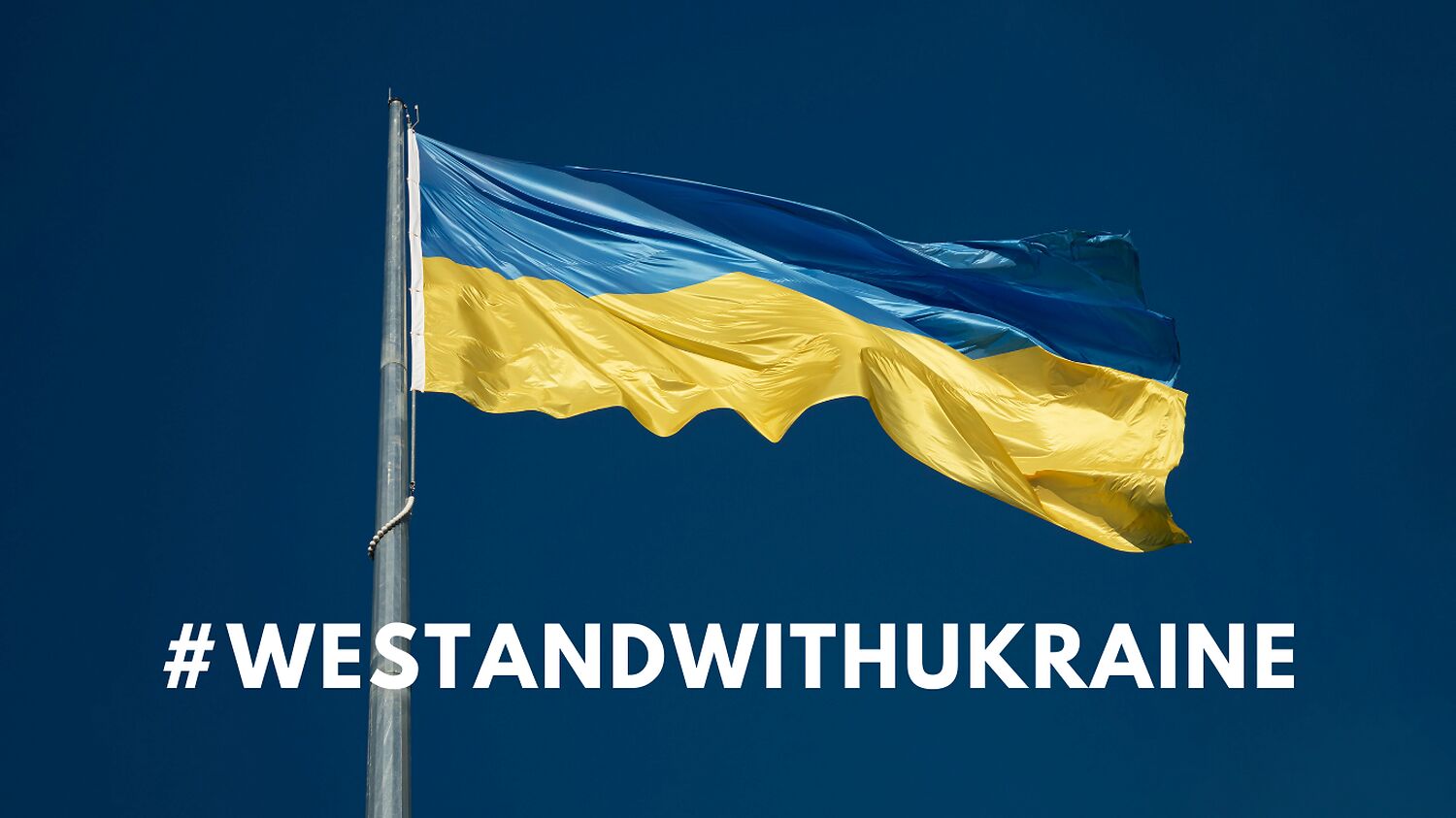 ECSA stands in solidarity with Ukraine

ECSA stands in solidarity with the Ukrainian people, Ukraine’s creators and all those who are suffering from this dangerous war and attack on democracy. We call on our members and all organisations in the cultural sector to stand united in calling for peace and support for all those affected. We call on European leaders to do everything in their power to assist Ukraine in these dark times. The European and international communities must respond universally to safeguard freedom, peace and self-determination for the Ukrainian people.

Let our European values prevail and let us continue to promote peaceful co-operation, mutual understanding, and tolerance across borders.

ECSA's President, Helienne Lindvall said:
"History tells us that dictators who seek to control the narrative and quash dissent target those who exercise their human right to freedom of expression and freedom to assemble, rights that are vital for all creators. This is why we must also stand united with the Russian creators and those protesting on the streets of Russia, who have the courage to speak truth to power by demanding peace and urging an end to the violence. We who have this freedom of expression must now use it to protect and defend those who don't – and those who are at grave risk of losing it." 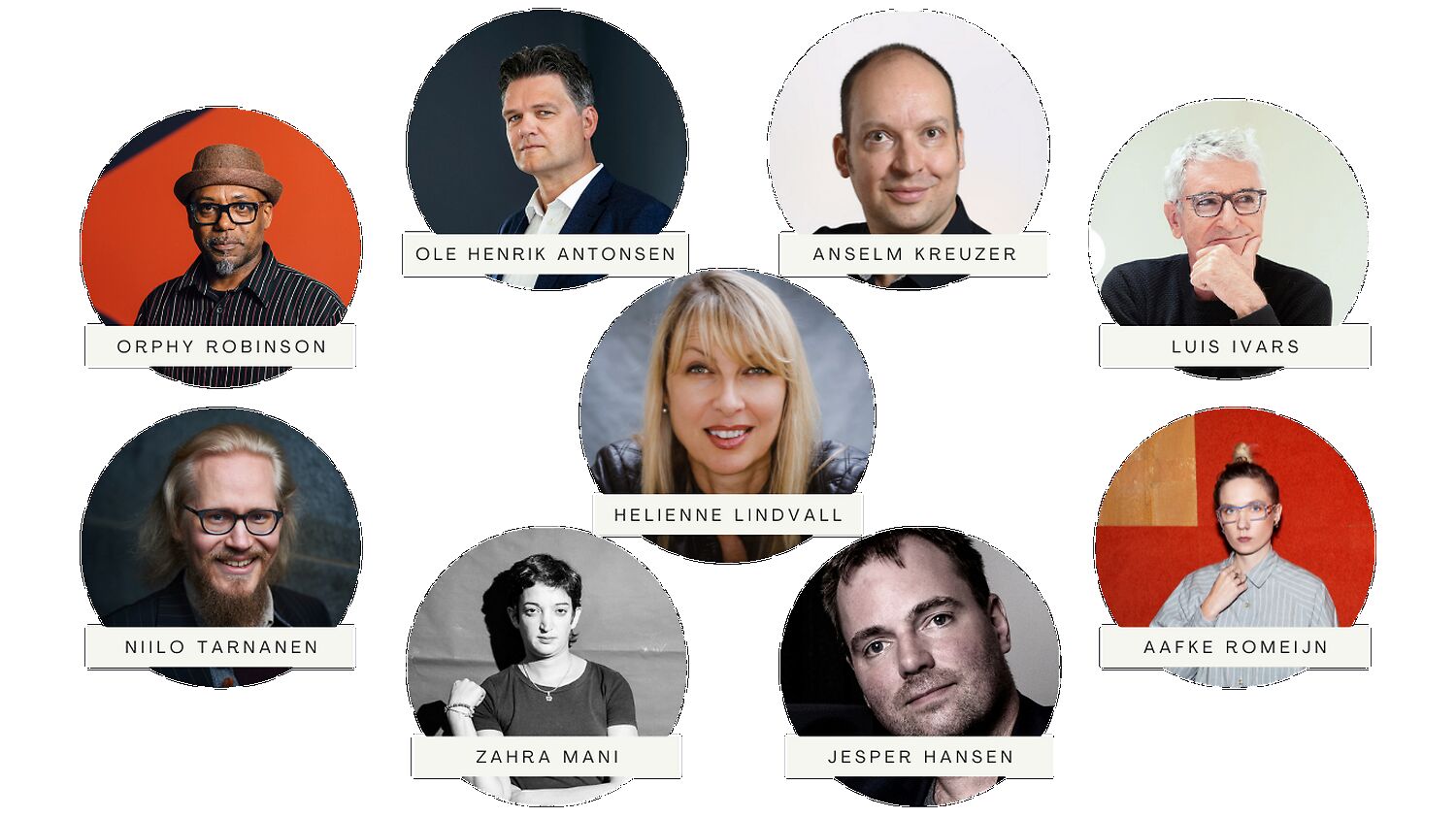 Congratulations to the newly elected board!

On the 14th and 15th of February 2022, the ECSA Members gathered online for the 2022 Winter Session and elected their Committee Chairs who form the newly elected ECSA Board. The new Board Members then elected Helienne Lindvall as ECSA President, Zahra Mani and Jesper Hansen as Vice Presidents, and Aafke Romeijn as Treasurer. Alfons Karabuda and Bernard Grimaldi were also elected respectively as ECSA honorary President and honorary Vice-President. Please see here the results of our elections and meet our new Board members. We are grateful and excited to have such a dynamic group join the board and bring their unique talents, expertise, and perspectives to the work of ECSA to further our mission of promoting music authors' rights. 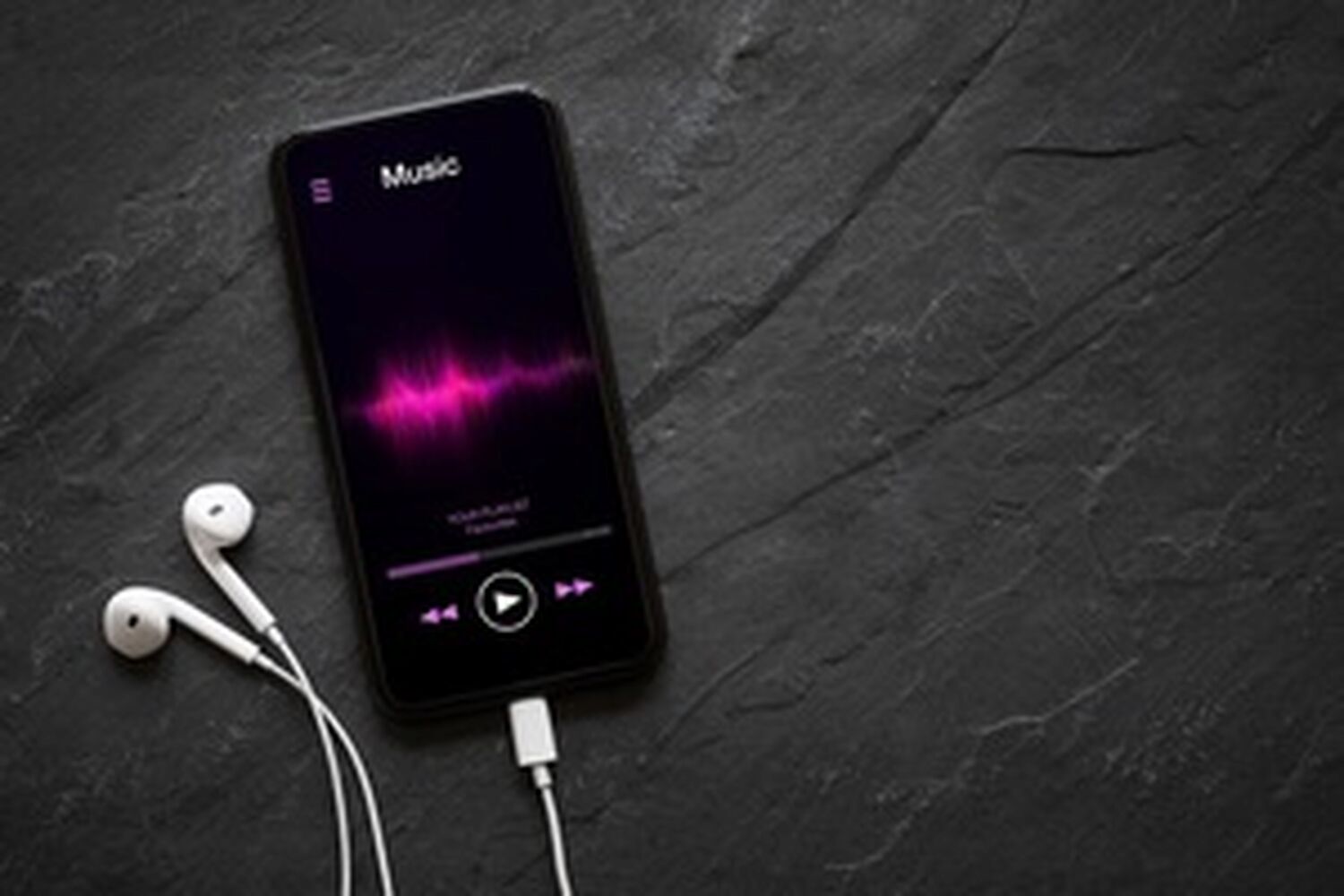 ECSA has submitted comments to the UK Competition Market Authority (CMA) in view of  its forthcoming market study into music and streaming services. The UK CMA study on Music streaming was one of the most important recommendations made by the UK Digital, Culture, Media, and Sport (DCMS) committee report on music streaming adopted in July 2021. In our view, the CMA should assess in particular the effects of the domination of the music industry by the major music groups, a widespread phenomenon which leads to a loss of value for the song and affects music creators as well as other stakeholders on a global scale. Reforming streaming and making it sustainable is one and will remain one of the core objectives of our Alliance. 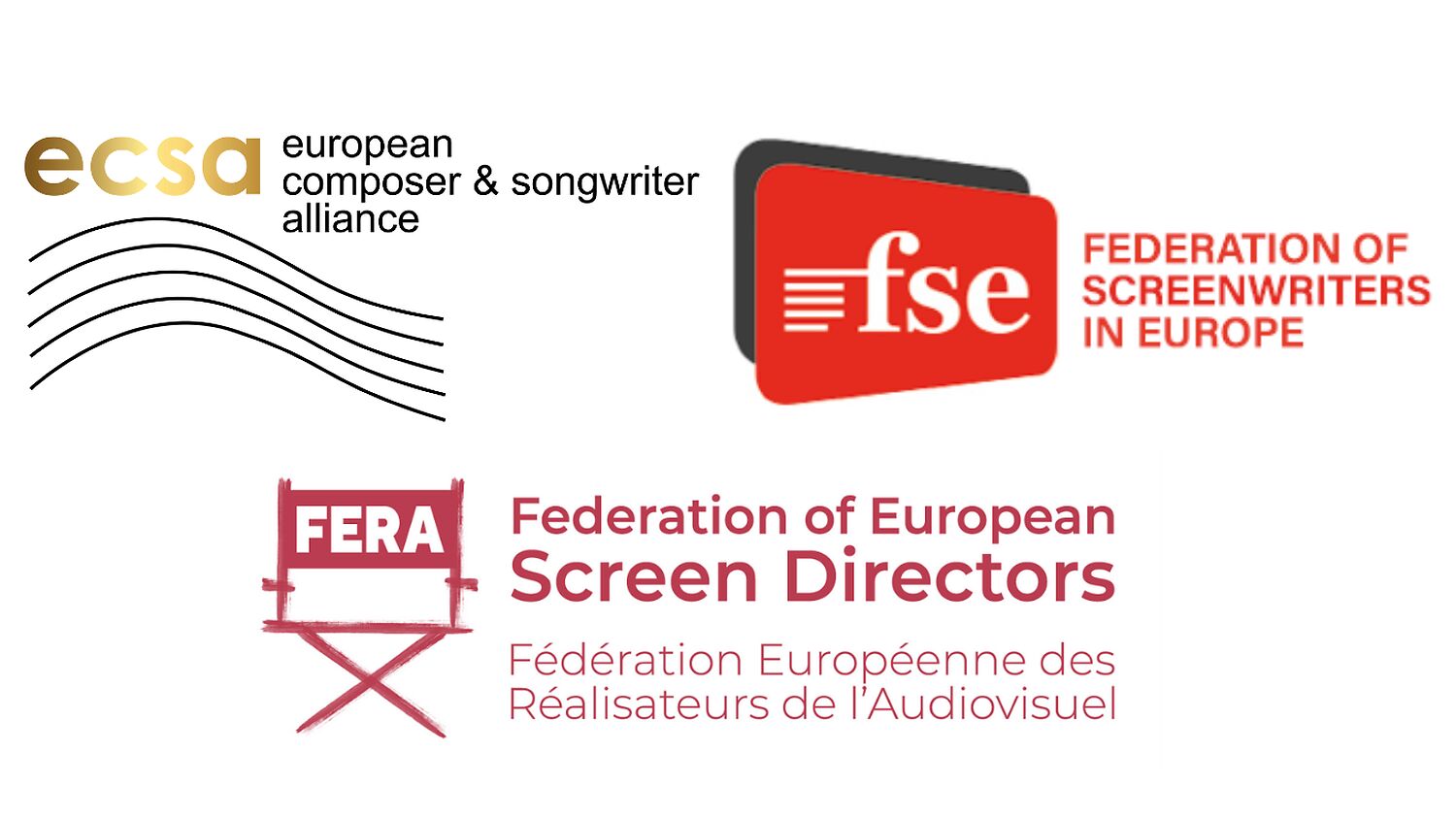 ECSA, FERA & FSE comment on the European Commission public consultation on the draft guidelines on collective bargaining of self employed.

On 24th February, ECSA, together with FERA (Federation of European Screen Directors), and FSE (Federation of Screenwriters in Europe) submitted their response to the European Commission public consultation on the draft guidelines on collective bargaining of self employed. After several consultations and the active participation of ECSA, other friendly authors’ organisations and trade unions, the European Commission finally adopted draft guidelines on the issue in December 2021. In our joint submission, we welcome those guidelines, and in particular the commitment not to act against collective agreements negotiated in the context of the implementation of the 2019 Copyright Directive. However, we also encourage improvements on certain issues, notably on the publication of recommended rates, which have proved to be beneficial to music authors. The European Commission is due to adopt its final guidelines before the summer 2022. 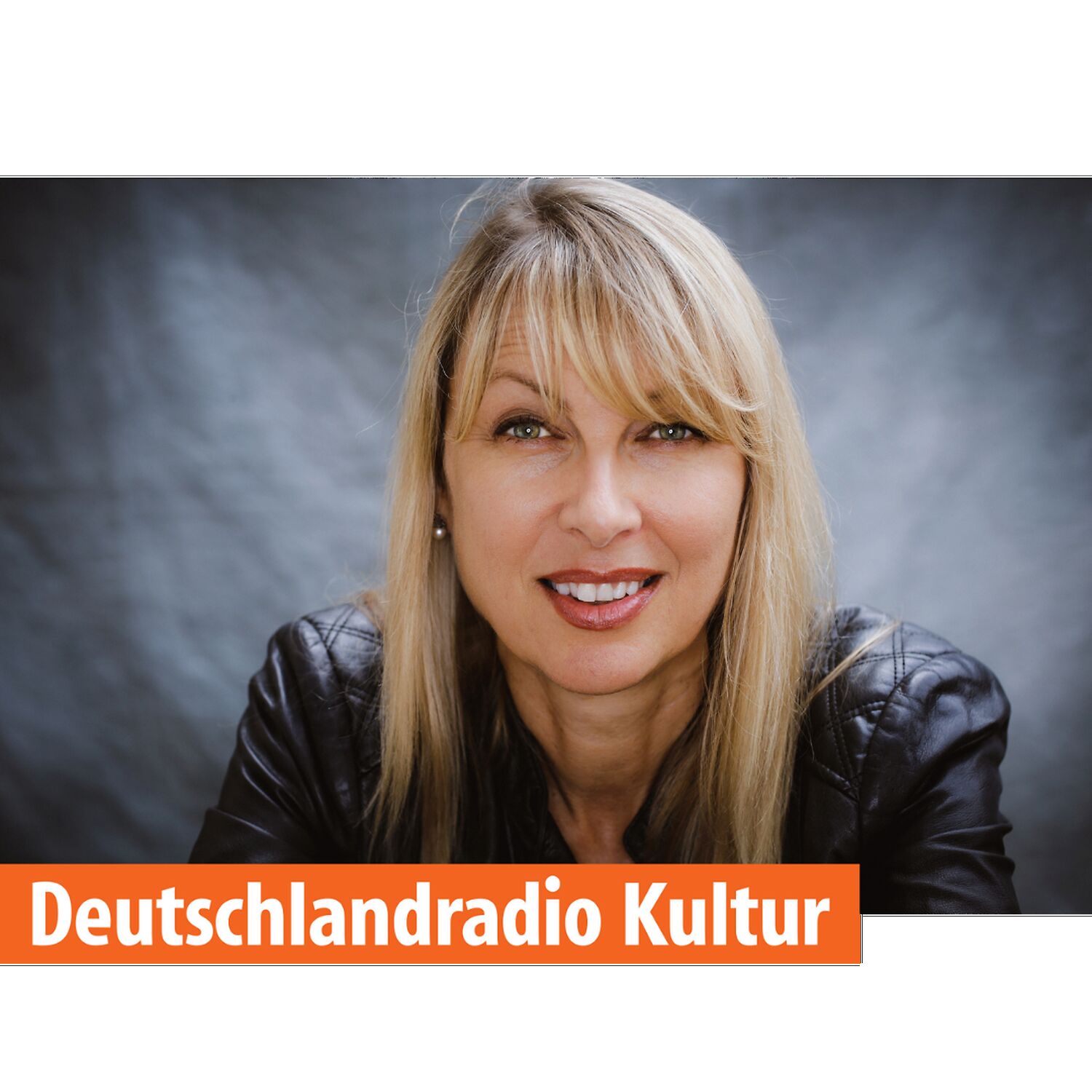 On Monday 21st February, ECSA's President Helienne Lindvall was a guest at Tonart, a daily radio show on Deutschlandfunk Kultur that focuses on music. Helienne was interviewed by Mathias Mauersberger and spoke about the current situation and challenges affecting songwriters and composers in Europe and the goals of ECSA. The interview is in German. 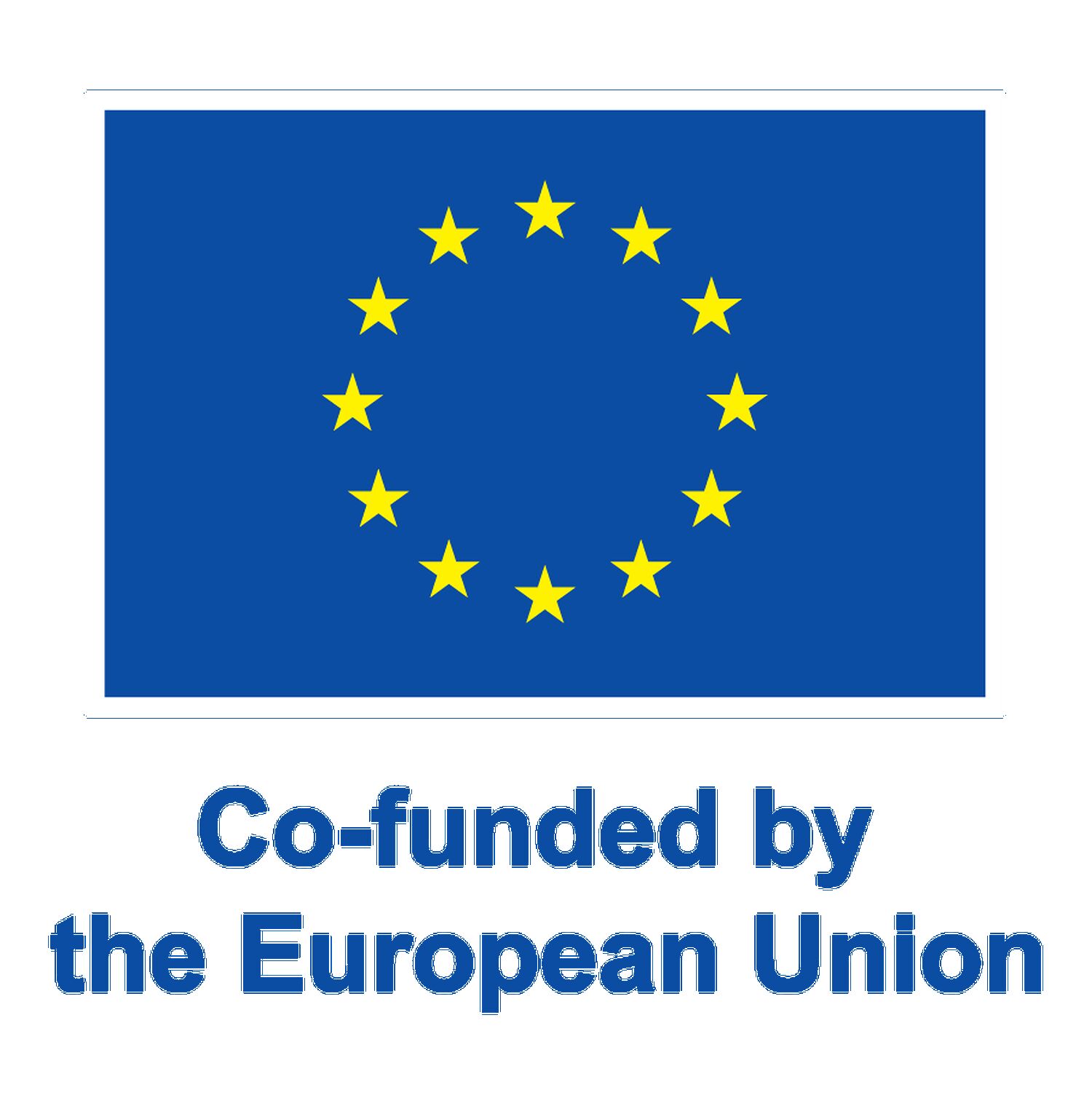 The Creative Europe Lounge ‘kick-off’ took place as a teleconference on the 15th of February 2022, organised by the ECSA office. There will be four more editions of the Creative Europe Lounge throughout the next 3 years and they will be organised in the framework of biannual Sessions. ECSA has created a dedicated lab aiming to actively involve the ECSA members in the planning of the Creative Europe project activities, as well as to allow them to assess and benefit from the outcomes of the project. These events will represent a moment for information, exchange, brainstorm, and evaluation. In this context, the ECSA Working Groups, staff and Board will present progress of the project activities and discuss them with the ECSA members. The recording of the kick-off lounge is available for the ECSA members upon request. 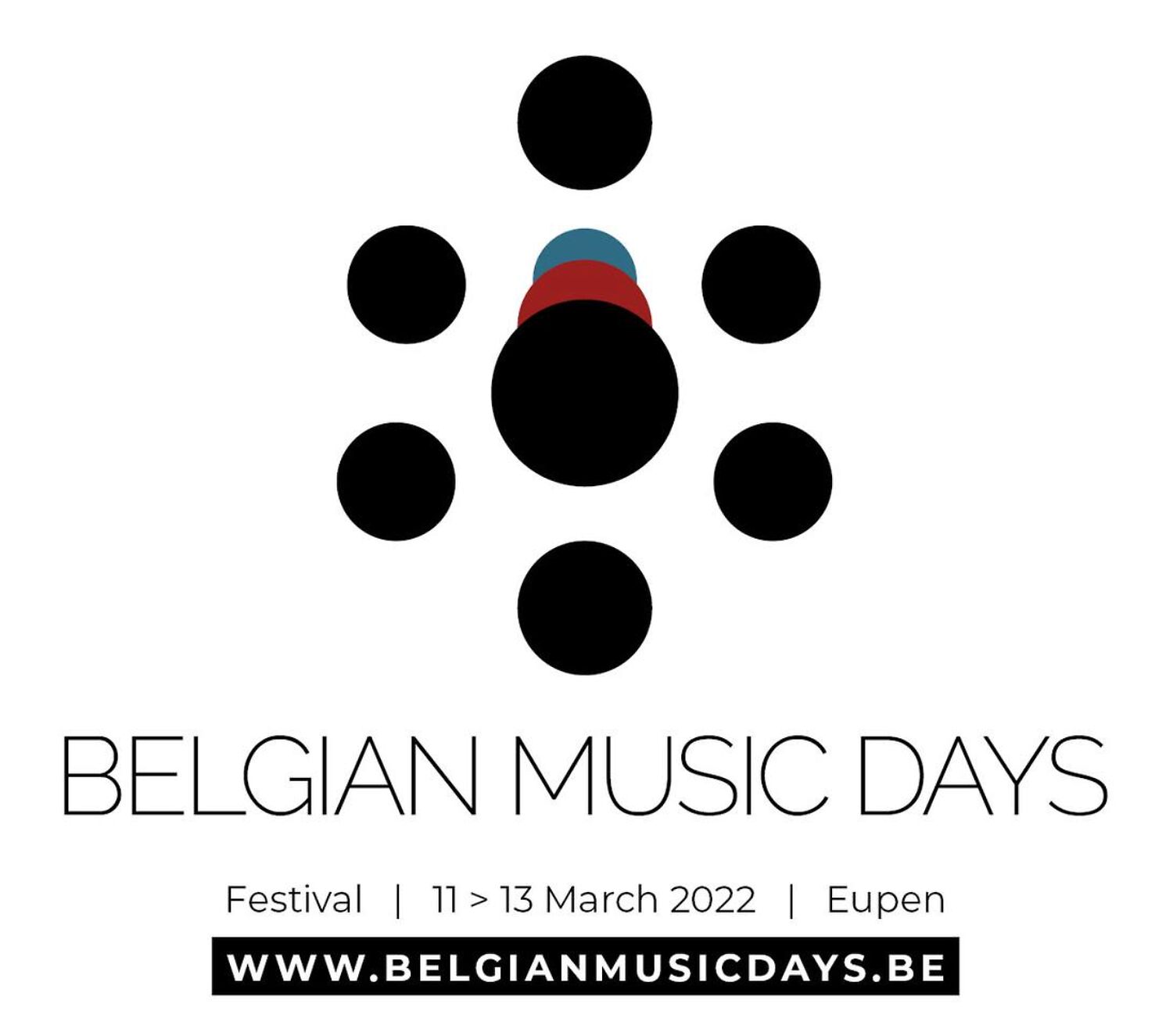 The Belgian Music Days from the Forum des Compositeurs in Eupen

From 11th to 13th March, a new edition of the “Belgian Music Days” will take place at the Alter Schlachthof in Eupen. The “Belgian Music Days” was first organised  in 2018 from the idea of ​​bringing together all the institutional linguistic entities that make up Belgium around a common musical heritage. Contemporary music written from 1830 to the current day is presented, with particular emphasis on the music of living composers. The festival also includes music from disciplines taught in conservatories: jazz and electroacoustic music. The full schedule for the programme can be found here. Online reservation can be made through this link. 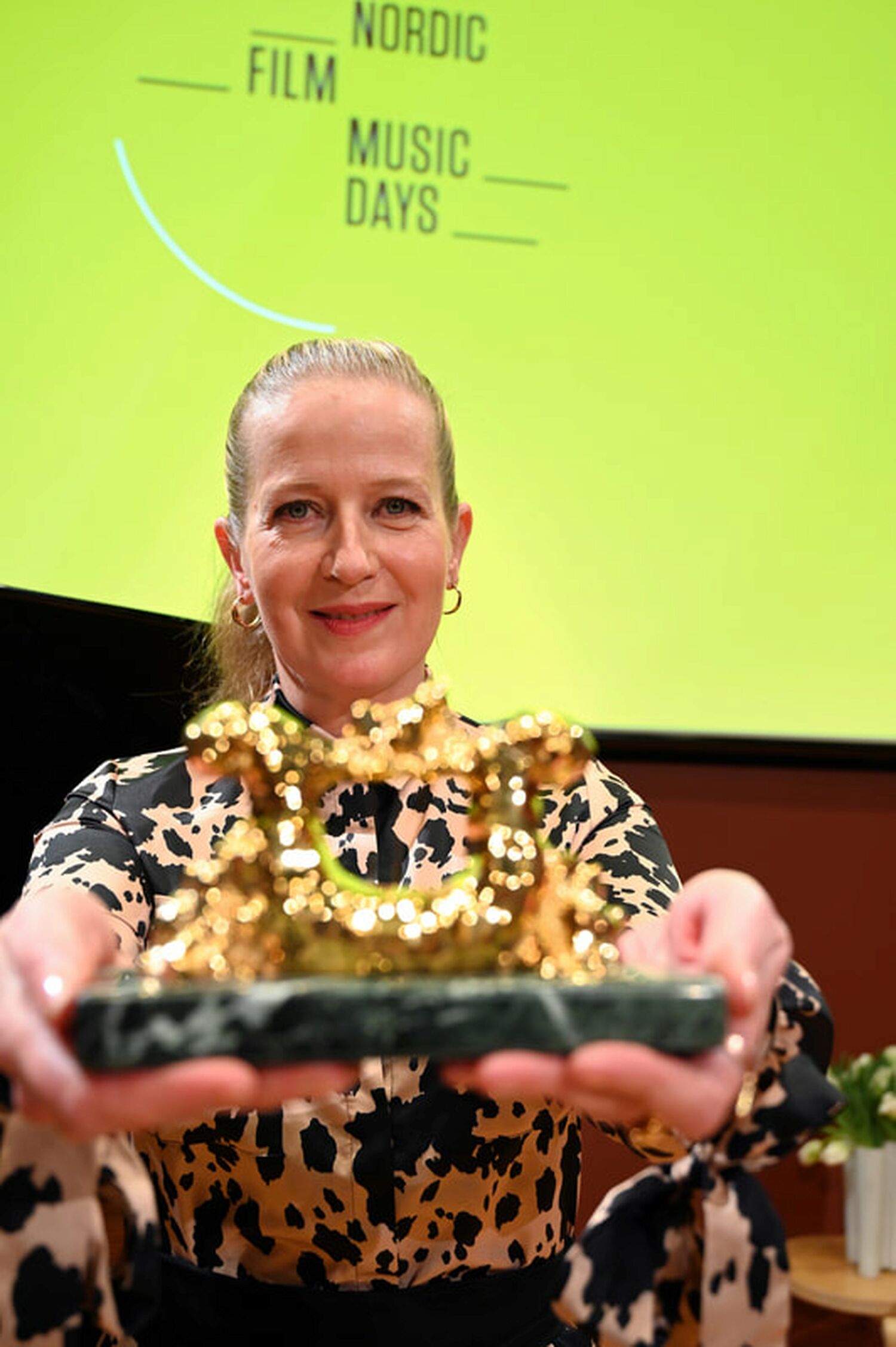 On the 12th of February 2022, the 2022 HARPA Nordic Film Composers Award was presented by the Jury, to the Finnish composer Sanna Salmenkallio for her score for ‘Aalto,’ directed by Virpi Suutari. The International jury commented on the winning score like this: “Sanna Salmenkallio’s score for Virpi Suutari’s ‘Aalto’ is very well written and very intimate. It is humanising the furniture and architecture that is shown in Aalto; making us feel the objects and buildings and creating a strong sense of connecting with both the man and his art. This is what Aalto’s rounded and singular forms sound like!” Each year during the Nordic Film Music Days, the HARPA Award is awarded to the year’s most outstanding Nordic film composer - and thereby putting spotlight on Nordic talent and craftsmanship. 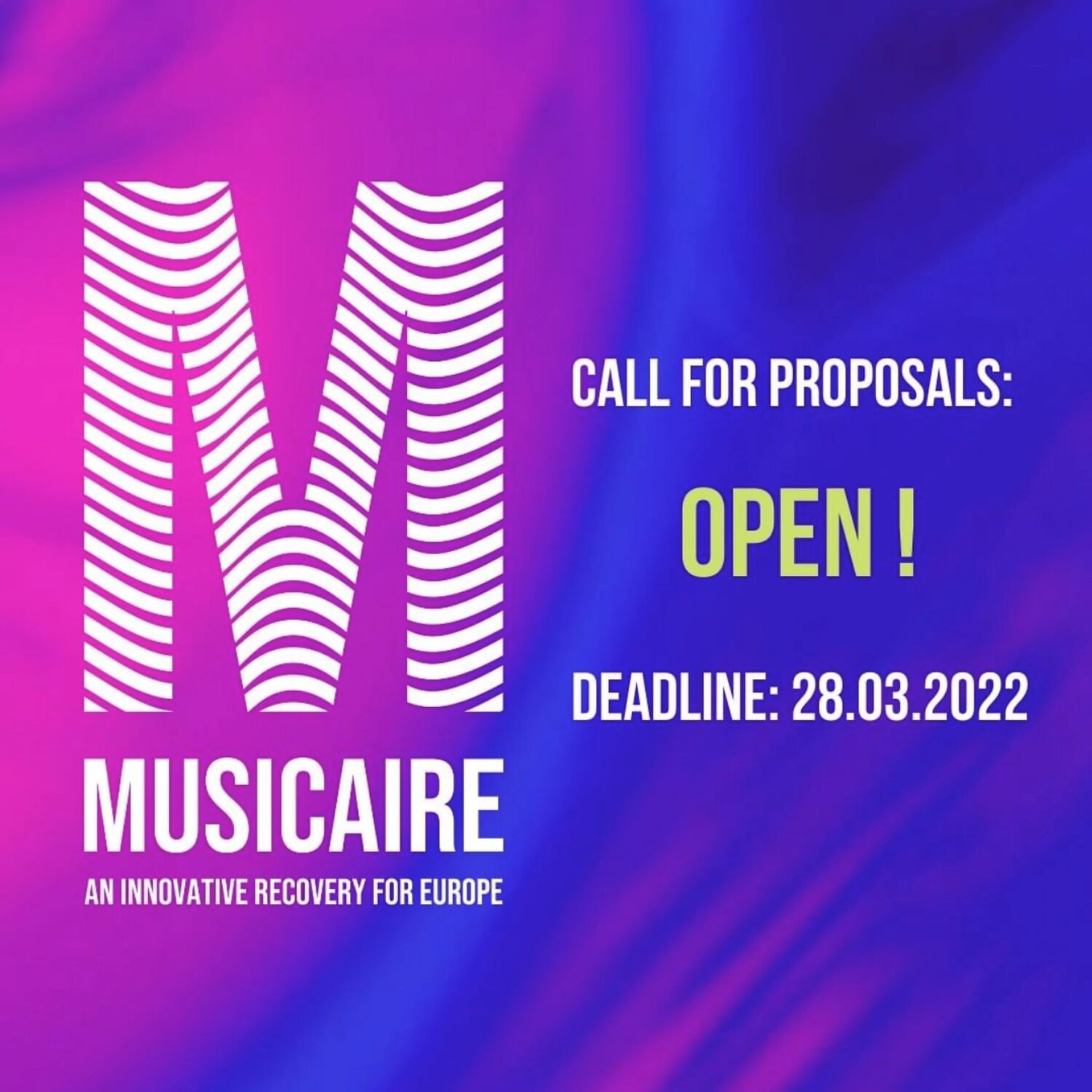 The first call for proposals of MusicAIRE – An innovative recovery for Europe has launched! The main goal of this project is to assist the recovery of the music sector from the challenges posed by the COVID-19 pandemic. The 3 categories funded under the MUSICAIRE project are green recovery, digital recovery, and just and resilient recovery. Grants of 15.000€, 30.000€, and 55.000€ will be distributed to support 50 projects. The deadline to apply is 28th March at 13:00 CET. Learn more at the Info session on March 9, from 11:30 – 13:00 CET.

For the 14th time – SoundTrack_Cologne presents the PEER RABEN MUSIC AWARD 2022 for the best music in a short film. Film composers and filmmakers are invited to submit their short films with their original compositions.The award commemorates the great German film composer Peer Raben, whose estate will offer a prize money of 1,500 € to the winner. The best film scores with innovative and dramaturgically coherent use of music and sound in relation to the narration will be awarded. The deadline for submissions is April 4, 2022. 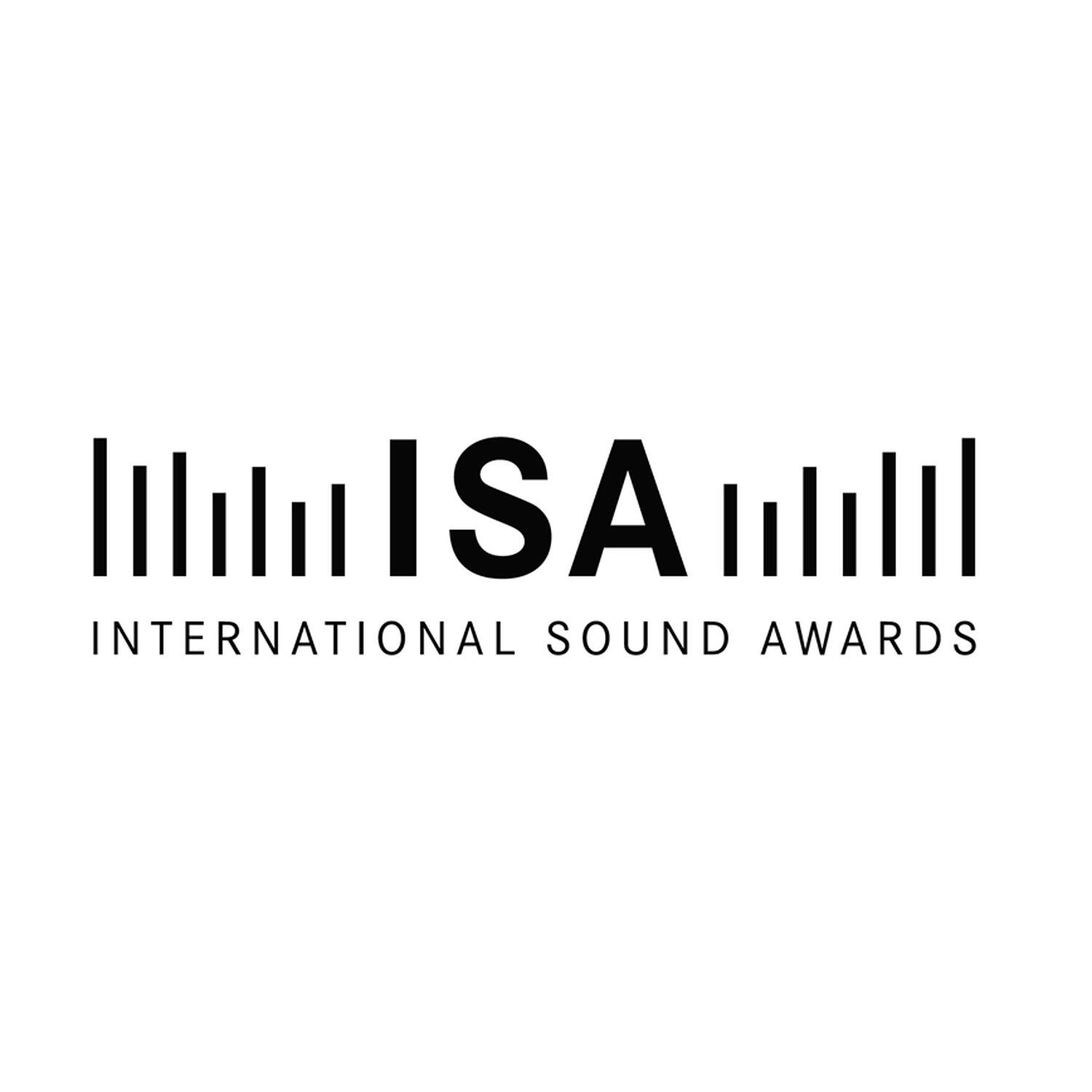 The International Sound Awards (ISA) promote innovative, smart and useful sound projects, products and services that contribute to their motto: Make The World Sound Better! Entry is open to companies, nonprofit organisations, individuals, universities and students and everyone who helps to make the world sound better. All submission material must be entered by 15th May 2022. Early Bird Offer: until 15 March: 20% discount on submission fees.

The UNESCO Global Report, Re|Shaping Policies for Creativity – Addressing culture as a global public good, is the third edition of a series designed to monitor the implementation of the 2005 Convention on the Protection and Promotion of the Diversity of Cultural Expressions.  The report provides an overview of the state of the global cultural and creative sectors, through insightful new data that sheds light on emerging trends at a global level and puts forth policy recommendations. ECSA’s honorary President Alfons Karabuda contributed to the report as one of the external reviewers.  Read the report here.

Created in 1999, Music & Cinema - Festival International du Film à Marseille (MCM) - named Festival International du Film à Aubagne until 2021- is now recognized among the professional industry, both at a national and international level, as a reference in musical composition for screen. Every year, the Festival presents over 250 movies, welcomes 500 professionals and reaches an audience of more than 25,000 people. This year, the festival takes place from 4-9 April 2022. 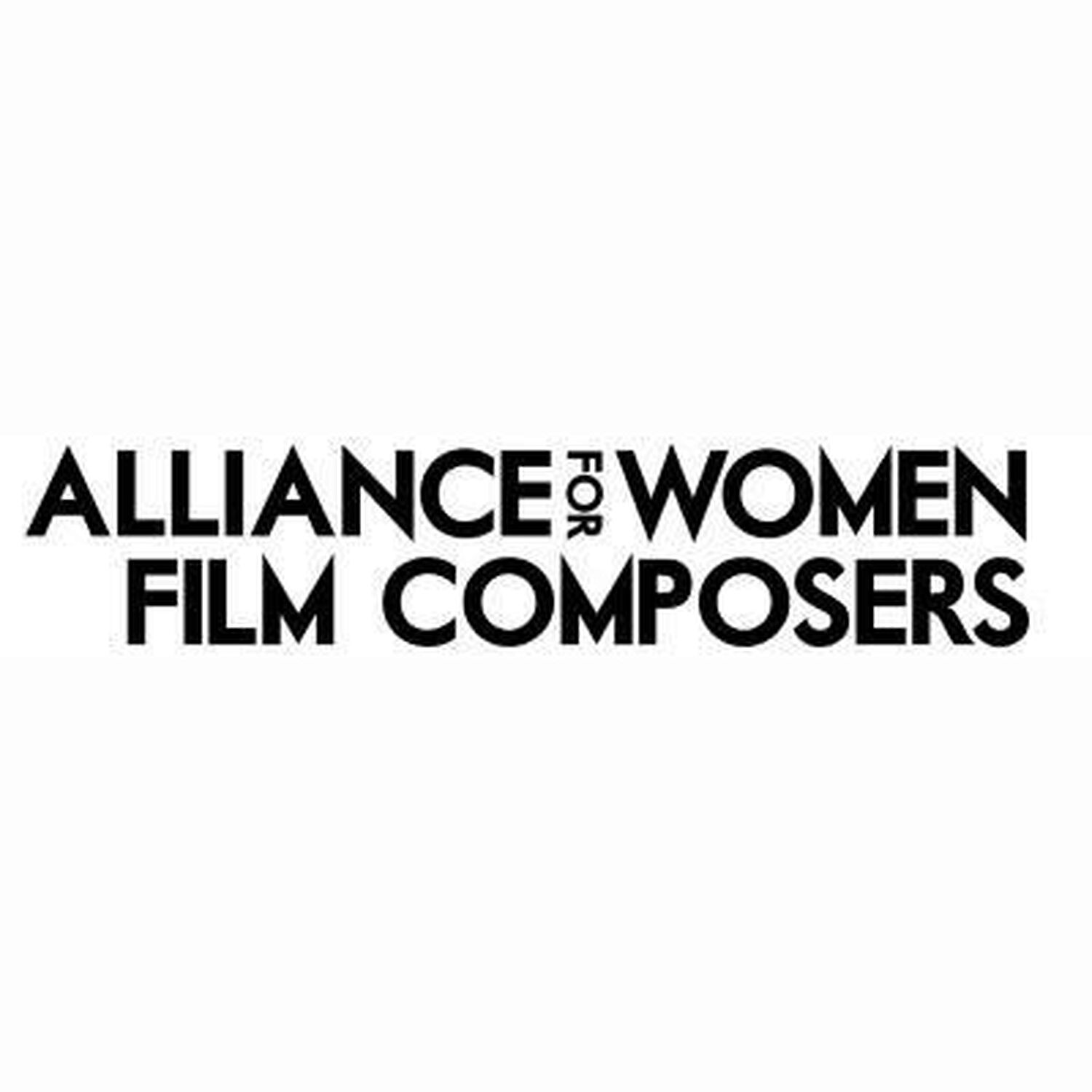 The Alliance for Women Film Composers (AWFC) has released a statement condemning the Academy of Motion Picture Arts and Sciences’ decision to not broadcast the best original score category live during this year’s Oscar ceremony. AWFC’s statement, which is signed by top members of the alliance including president Catherine Joy, expresses disappointment in the Academy for cutting the “original score” and other seven categories from the live show. 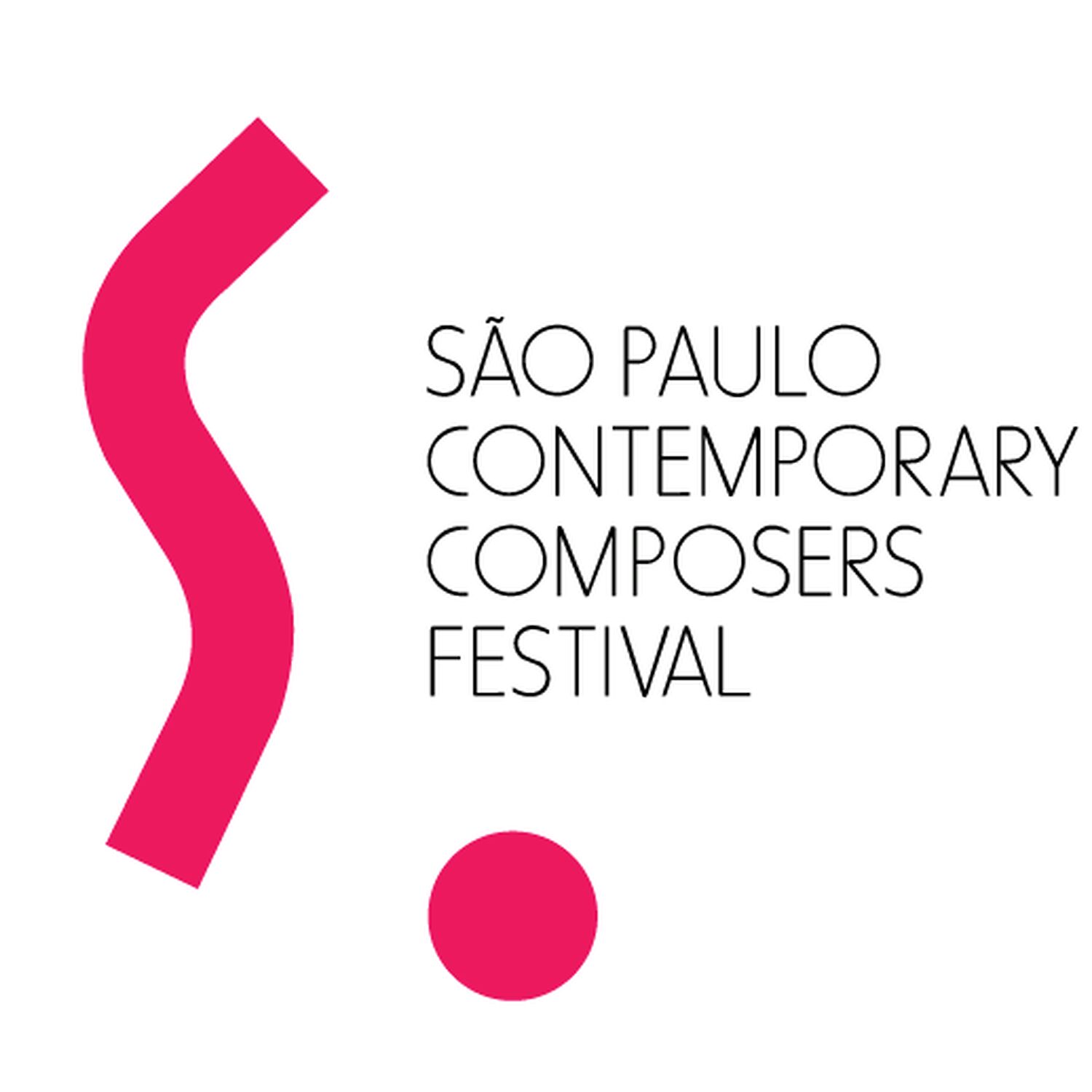 The São Paulo Contemporary Composers Festival (SPCCF) is extending an opportunity to a few composers, to perform their orchestral work with the Brazilian National Theatre Claudio Santoro Symphony Orchestra during the festival.  The orchestra concert will take place in Brasília, Brazil, conducted by Cláudio Cohen. To be considered for the Orchestral Performance: participants will be asked to submit an orchestral work after they have been admitted to the program. Travel expenses (São Paulo - Brasília) will be covered by SPCCF and each participant will receive a recording of the premieres. Read more here. 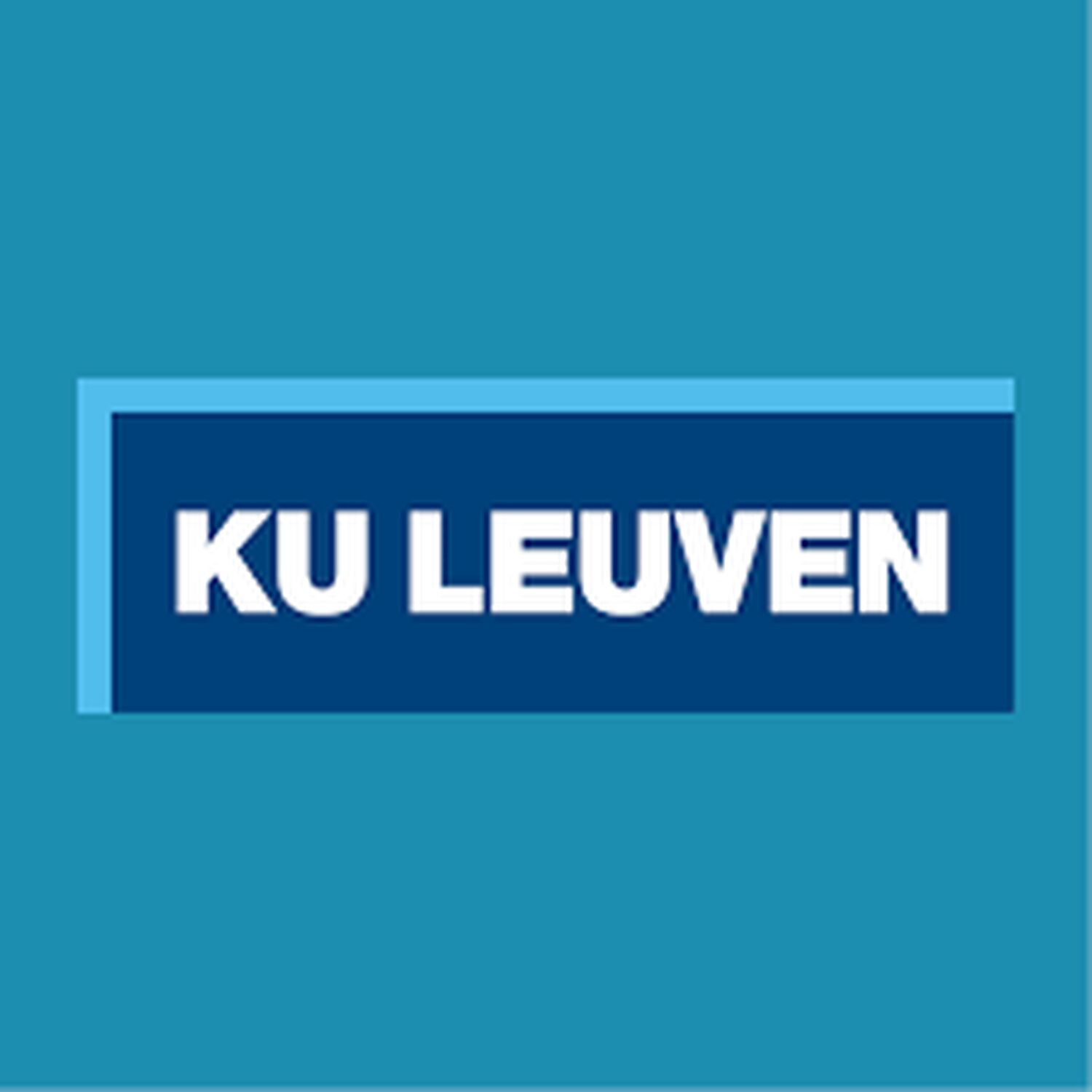 ECSA is glad to invite its members to join the online thesis defence of Jozefien Vanherpe, a PhD researcher for Consumer Competition Market (CCM) in KU Leuven. The public defence will take place on Monday 28th March at 5:00PM CET. The thesis focuses on the question how the legal framework can contribute to achieving a fair(er) balance between the interests of composing and/or performing musicians and their corporate partners in the digitised music industry.  The national laws of Belgium, France, Germany and the Netherlands are analysed against the background of the extensive relevant body of EU law in the thesis. The existing legal framework and the implementation process of the Digital Single Market (DSM) Directive are evaluated on the basis of the criterion of procedural and substantive fairness.  Register here.